Review: Rosetta's A Determinism of Morality

Review: Rosetta's A Determinism of Morality 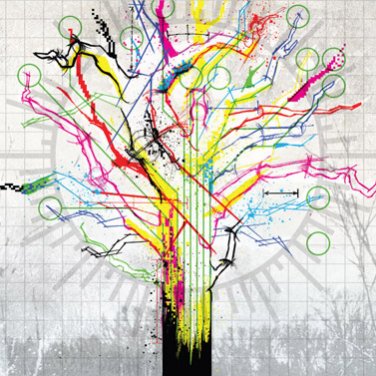 A Determinism of Morality- 2010
Track 1- Ayil: The song begins with a brief fuzz in. Then it quickly transitions into a light but sharp riff. The vocals and drums provide the in your face type of chaos, but the guitars in bass keep the song grounded with mellow, almost Post-Rock, type grooves. At about the 1:10 mark the songs begins to slow down. The drums begin a snare to kick drum section while the guitars concentrate on just one riff. The vocalist will occasionally belt out some introspection. This section of the song makes me picture some sort of futuristic painting where a guy is looking at the sky watching giant explosions. At about 2:35-2:40 the song picks up again. The vocals become a little harder to understand, mostly due to the fact that guitars and drums dominate this section. At 3:40 the song breaks into a heavier riff, like something more suited for Godflesh or Terror. At 4:50 the chaos abruptly ends and fades for the last 10 seconds.

Dislikes: The only minor flaw that I noticed was that the bass was relatively unheard or unrecognized throughout the song. I'm a huge fan of a brief, but succinct bass riff. The song lacked these.

Track 2- Je N'en Connais Pas la Fin: The song fades for a moment. Then a nice drum section starts up with some bass that complements. While this is going on, a really light and melodic riff takes place. At about 1:22 the song kicks in the vocals, which again, add nicely to the melodies of the instruments. There is just something about the singers voice that helps bring out the amazing instrumentation of the band. From 1:35 to about 1:50 there is a well-placed start/stop section that leans a little more on the heavy side. At the 2 minute mark, louder and more pronounced guitar melodies start to appear while the drums break into chaotic beats that, like Ayil, accentuate the melodies of the guitar. I also notice that this song recognizes the bass more; I enjoy this. At about 3:52, this really cool Van Halen-esque riff shows up and it's just really awesome. Towards the end of the 4th minute, the song gets really heavy. The vocals become tighter and stronger, the guitars get louder and speed up a little, the bass becomes thicker, and the drums steady up, but become more threatening; as if something is on the horizon. Promptly at the 6th minutes, a huge and heavy riff from both bass and guitar surface, the 4th and 5th minute gave hints to this. 6:30: the songs starts to let up a little and then gradually fades to the 6:50 mark.

Track 3- Blue Day for Croatoa: This song takes a lighter approach to the intro of the song. It begins with a simple guitar melody. At the 18th second some added, presumably female, voice appears in the background. I couldn't figure out what she was saying, though. At 42 seconds, this fade from a piano, I think, replaces the female robot voice as background. At 1:05 the drums appear with a smooth snare/hi-hat groove. 20 seconds later a bluesy sounding bass appears, Thank God. All this seems to be happening at once and the fade from earlier is still...well...fading. Occasionally, a ride cymbal will be hit and the times in the song which it is hit reminds me of an ocean. At 2:50 the songs starts to really pick up. The song gets louder at 3:06. Then, without warning, at 3:18 a strong and crispy guitar chord is strung, catching me off my guard. Then again at 3:23. The drummer is lightly tapping his cymbals. Then at 3:27-3:29 the same chord is hit again, but with a little more crisp and fuzz added to it. All the while, the fade is still building and crashing like an ocean wave. At 3:35 the chord is hit again. The guitarist seems to be really enjoying playing this chord. By 4:12 he's played the chord at least 6 times. At 4:20 the song returns to the state it was pre-3:18. The bluesy bass, the steady fade returns, the light melodic riffs, and the ocean-like drumming. Aroudn 5:05-5:10 the song picks up, keeping the same riffs. The drums adds louder cymbals, harder snare, and sharper hi-hats. The steady melody of the guitar gets louder and louder and by 6:16 it's at full strength. The bass didn't gain any momentum, though. And finally, at about 6:25, the song begins to slow and then that building and crashing fade crashes for the last time at 6:38.

Dislikes: The fade would, at times, become really annoying, but once the song picked up in the middle, I really didn't mind so much. That was really the only thing that bothered me, but not enough to take away from the overall score.

Track 4- Release: In this song, Rosetta returns to the chaotic, yet melodic, approach they took in the first two songs. The vocals begin a bit early, but they are good, nonetheless. The drums begin with a series of chaotic Tom hits. I seem to notice that the vocalist has added more emotion to his singing. At the minute mark, the guitars become more pronounced than in the beginning. The bass, again, seems to be unrecognized. In an unexpected turn, 1:29 provides a break from the usual gritty screaming vocals and turns to melodic and clean vocals from, I presume, somebody else other than the actual singer. While the clean vocals present themselves, the guitarist turns for more technical Post-Rock type riffs. The drums start relaxing a little bit. Not a lot of snare, but a lot of tom and hi-hat hits. At 2:27 some sort of weird spacey fade happens and then transitions back into the chaotic image that the song began with. The chaotic toms take up again, along with gritty guitars. At about 3:12 the songs gets significantly heavier and the vocals slow down a bit. A catchy hardcore riff assumes the role that the Post Rock riffs took. At 3:40 the heaviness falls into a darker mood. The drummer does some sort of complitcated "big rock ending" thing while singer screams incoherently. The guitars set a darker mood, but then fade back into a mild melodic style. 5:10: The big rock ending is still going on, and so is the screaming. The guitars are back to a darker mood. At 5:17 the guitars do some cool feedback that is coupled with an outside source provding fade. 5:37: The song is over.

Dislikes: Again, virtually no bass recognition. That bothered me. Then towards the end, the darker mood, I felt, came a little too quickly. A fade into it starting at maybe the 4 minute mark would have been more appropriate.

Track 5- Revolve: This song presents the more melodic side we saw in Blue Day...The drums have a nice comfortable beat. The guitar has established a nice light riff for a jumping point. At 1:47 these epic screaming vocals begin in the background while the guitars and drums dominate with slightly more chaotic riffs and beats. The thing I notice is that the bass has a "voice". At 2:16 the vocals come to the forefront, so that it dominates. The guitars, bass, and drums fall back into their melodic attitude, while the vocals contrast with some well-placed chaos. At 3:24 the song cools down and returns to its softer state we saw at the beginning. The drums begin a steady light snare section, but only for a moment. At 3:50 the song breaks back into the chaos we saw at 1:47 to 3:23. I notice that a riff from Ayil briefly makes headway at 4:26-4:30. At 4:51 the song gets heavier, but still maintains the melody. At 5:16 the song begins to build. By 5:44 the song is in full strength. The drummer seems to be getting more toms and bass drum in. The guitar is shelling out some "ok" hardcore riffs, but the bass has seemed to disappear in this section. At 6:30 the song fades into the end. 14 seconds later, I am left in a state of semi-shock.

Dislikes: The hardcore riffs in the song's fifth minute were not really that enjoyable for me, they were well placed, but their delivery wasn't of them wasn't that exceptional.

Track 6- Renew: I was really caught off guard by this song. It begins super mellow. Like Jazz mellow. There's this pleasant fade going on while a steady and mellow riff repeats itself. Then out of nowhere, at 49 seconds, the chaos flies into full effect. Something that I really see in the other songs. The chaos didn't go into full effect until the end of the song. At about 1:30 the song falls back into a mellow tone, but the speed is a little faster. The bass also seems to have some mellow jazz bits going on. At 2 minutes this scale comes in on the guitar. Like a "Rosetta does Eruption" type deal. This continues without any build or fade for about a minute and ten seconds. Then the song breaks back into the chaos this album is known for. But the melodies coming from the guitars are really nice, almost makes you want to tape your feet. The drums increase in chaos and in speed. The guitar melodies increase in strength and in number. At 4:47 the song hits this awesome heavy riff extravaganza. The drums are just everywhere, the bass is thumping, and the guitars are just throwing out these beautiful and beefy guitar riffs. It builds and builds and builds, then abruptly and awesomely ends at 6:02.

Dislikes: I think that if the intro of the song had lasted until like the 2 minute mark, the song would have been even more epic. With that said, I kind of did not enjoy the abrupt intro to chaos at the 49th second. It's not a HUGE deal because the song was total win, but that little revamp would be good.