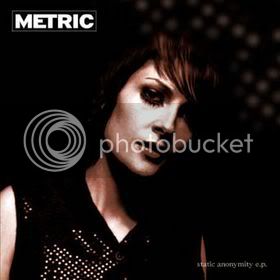 The first track on the EP, Grow Up and Blow Away (4:24) is a highly synthesized love tragedy with drugs and indecision. The singing is surprisingly pretty and it has a nice melody and beat. Everything about it is layered with sound effects which give this song a slight electronic feel. Overall, it actually is heart-wrenching and makes me feel guilty for using so many drugs last summer.

Siamese Cities (3:49) was somewhat of a disappointment. For a second there was a hope that all five song could live up to the first, but no consistency here folks. This track has parts that are corny enough to be laughable. The drums are bland and every other instrument just doesn't have enough going on. There's too much synthesis.

Down (3:21) made me want to cry. Not because it's a sad song though, because I want to stop listening to it but I had to give the entire song a chance. It's cheesy and has the same problems as the last song did.

Okay, Soft Rock Star (4:26) was better then the last two tracks but no where near as good as the first. The voice is sort of starting to annoy me and Lyrically it feels sort of cliche. In fact, this whole album feels cliche.

My Album Overview: Actually, this EP was better then their last one. I still don't think very highly of it, a lot of these songs rub me as cliche, cheesy, corny, boring, untalented. So far I'm not so much of a fan.
[SIZE="4"]
5/20
[/SIZE]

Vancouver Internet Marketing
website design and hosting
Yeah, I bet the whole CFI incident would not really appear that different to a Martian anthropologist from what goes on in some monkey tribe.

Nor what happens in many organizations, religious, non-religious and particularly famuly founded business organizations, when the founders see them as a personal accomplishment rather than as a public organization with intentions of ongoing influence and activity.