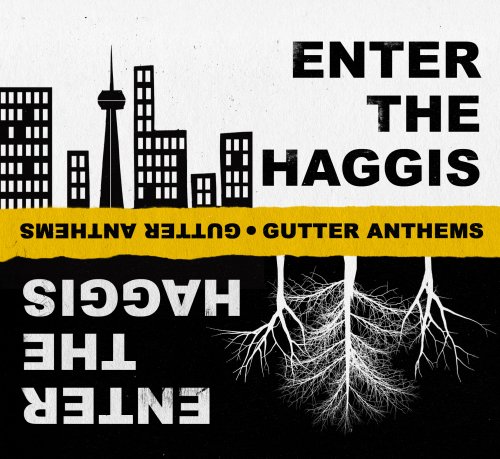 Enter the Haggis: A Canadian band that blends World, Folk, Celtic, and Rock music. ETH is constantly pushing the limits of its genre, showing that, above all else, the band is more experimental than most on the scene. Like it's namesake food, the band is comprised of unique and different flavors that melt together into something amazing (though I'm no fan of the food, haggis.)
They are well known for their extensive touring, averaging 150 dates a year. This, combined with appearances on Regis and Kelly, PBS, and A&E has begun to grant the boys the recognition they deserve. Like most bands of the world/celtic label, they combine various pipes, fiddles, guitars, and drums to create a unique and entertaining sound.

Gutter Anthems: The seventh release for ETH, and arguably their strongest. This album fills in the missing pieces that the previous (Soapbox Heroes) left out. It's a solid, driving album, comprised of grand drinking songs and pop gems. ETH hits the mark with Gutter Anthems, delivering solid, well thought out songs, it shows the band's drive to experiment as much as possible. Their is an undeniable amount of heart and spirit within this disc, you can feel the blood and sweat that went into it's creation. It's very rare these days for an album to be so enthralling, let along as moving at Gutter Anthems. Once and awhile, it may seem boring or lengthy, but these seem to be reflective highly upon one's mood. Regardless, I highly recommend this to anyone looking to get into Enter the Haggis, as this marks itself as their strongest, yet most accessible album.


Track Listing
1. Intro - As far as Intros go, I'm not a huge fan. This one is no exception. Nice and all, but no exception.
2. The Litter and the Leaves - This is the album's defiant drinking song. It takes you out of the bar and throws you face down in the gutter, which is where it actually takes place. It punches your ear in from the start and makes you swell with a rebellious pride. Like the rest of the album, this one won't let up, even at it's slowest moment, you still feel the urge to take to the streets. Disregarding the intro, this is an outstanding track to start off with.
3. Cameos - Sugary Pop Folk Goodness. One of the most radio-friendly tracks on the album, yet it still retains the experimentation that Enter the Haggis has come to be known for. An all-around solid track.
4. DNA - Another of the radio friendly songs, albeit a better one, in my opinion, than Cameos. It's a bit catchier, with a chorus you'll find sneaking into the back of your mind, and solid instrumentation. One of the most accessible songs on the disc.
6. Did You Call Me Albatross? - The first instrumental on Gutter Anthems. Extremely traditional sounding. Nothing spectacular to note.
7. Noseworthy and Piercey - The band shows it's homeland roots with a folk tale, and they pull it off flawlessly. A story about some fishermen from Newfoundland and their struggles on the open sea. All in all, a rather difficult song to get into. I found it took me three or four listens, spaced apart, until I finally learned to appreciate. Definitely not the best, but it keeps the album rolling, and that's all we can ask for.
8. The Death of Johnny Mooring - Vivid imagery, great guitars, outstanding fiddles, and a fine story tied all together. One of the star tracks, it starts heavy, softens, picks up, softens again, and finally breaks it all out flawlessly. Some of the best guitar work on the disc, also one of the heaviest songs.
9. The Suburban Plains - It has a somewhat tribal beat, and at times seems to be a sister song to "Cameos." It features some rather nice guitars, and all in all turns out to be another shining track for ETH. Has a very kid friendly feel to it.
10. Real Life/Alibis - A calm folk beginning that builds and explodes into the pop that is Alibis. An above-average song, but nothing too outstanding.
11. Murphy's Ashes - A prog-esque, instrumental romp. It's one of the faster paced and more aggressive songs on Gutter Anthems, and for this, it's one of the best. There is some outstanding talent shining through on this track. Truly, the most adventurous song out of the list.
12. Sea of Crutches - Calm and easy sound? Check. Catchy hook? Check. Traditional feel? Check. Of all the songs, Sea of Crutches seems to have the most replay value. You'll find your foot tapping and your head bobbing along within your first listen.
13. Burn My Demons - A short poem. Kind of powerful and insightful, but almost feels out of place.
14. Ghosts of Calico - A powerful rock song with heavy blues hints. It becomes one of the deepest and strongest tracks on Gutter Anthems and in all honestly, it feels more like the track an album would close on, but we still have two to go.
15. Lights and Cars - It starts off with a after-school theme song vibe, then the pipes kick in. Very beautiful and full song. Though at times it may seem lengthy (5:12) it maintains your overall interest, and keeps you in a serene place. Definitely one of my personal favorites.
16. Broken Line - I know I say "Ghosts of Calico" should be the closer, but this outstanding track does the job better, which is why it's rightfully at the end. Some great lyrics meld with outstanding instrumentation to create the ultimate all star for the album. It may not be as driven as the rest of the disc, but it holds it's own, and at times feels more intense. A strong ending for a strong album.